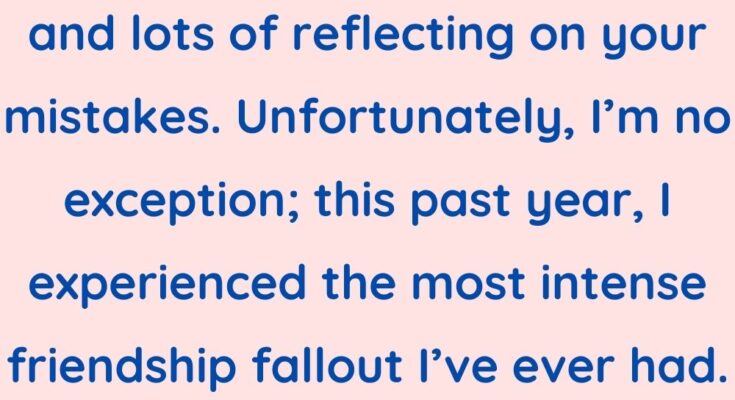 We’ve all been there — a friendship disagreement leads to bad blood, awkwardness, and lots of reflecting on your mistakes. Unfortunately, I’m no exception; this past year, I experienced the most intense friendship fallout I’ve ever had. The sticky situation led me to do some serious thinking about where I went wrong throughout our friendship; so, that being said, here are the six most important things I learned from a major friendship fallout.

1. Take their advice with a grain of salt.

In the midst of this friendship, I began my first-ever relationship, and I’d just moved away from home for the first time. This means that I constantly needed advice about how to navigate such new environments. But looking back, I definitely relied on my friends’ advice way too much — especially for people that I’d only known for a couple of months.

Whenever I had a conflict with my boyfriend, and whenever I didn’t know how to manage a school issue, I always ran right to my friends for help. And even though it was helpful at the time, taking their advice all the time didn’t challenge me to make my own decisions. I also shouldn’t have relied on their advice as if they were relationship or school experts — because they weren’t, and no decision should be made entirely based on another person’s judgement. It was detrimental for me to rely on them, not only for my own growth, but also for our friendship; I had no idea what their intentions were, nor did I know that they had the relevant experience or wisdom to advise me. Sometimes, it’s better to just trust your gut and move along.

2. Talk about your relationship as minimally as possible.

On the topic of talking about things when you really shouldn’t, another aspect that led to the destruction of this friendship was my too-frequent boyfriend talk.

Now, I was naïve in thinking that my friends were interested in hearing about my newfound relationship (even though they said they wanted to) — the truth is, nobody wants your conversations to be clogged up with unimportant aspects of your romantic life. As soon as discussions with a friend become relationship advice sessions and date breakdowns, your friendship becomes vulnerable.

It’s better to just keep the details of your relationship to yourself — both the big milestones and the tedious aspects. You never know what could lead to disagreements, jealousy, or judgments. For example, when I told my friends that my boyfriend and I didn’t have each other on Snapchat because we both hate talking on social media and instead prefer texting, I got a bunch of weirded-out looks and judgemental stares. Okay, I thought, that’s a detail I definitely didn’t need to share. I didn’t need their input nor their validation, and neither do you.

My fatal flaw in this friendship occurred when I’d change my plans last-minute depending on my preferences, and it’s something I’ll never do again. I advise that you pay close attention to this as well, especially if you have a significant other.

No matter where you’re going or what your initial plans were, if you do leave your friends midway through a hangout session, it will look like you’re ditching them. Even if you’d prefer to be somewhere else with different friends, it’s not wise to leave them (especially if your SO is in the mix). They may become bitter and angry — rightfully so, sometimes. The point here is: once you make your plans, they should be set in stone. Maybe this isn’t how friendships should work, and maybe people’s intentions are more complicated than they appear, but it’s definitely something I’m going to keep in mind in the future.

4. Never say anything remotely negative about anyone behind their back. Ever.

Growing up, my dad would constantly repeat one phrase to my sister and me. “Remember two things: treat people the way you want to be treated, and never talk about anyone behind their back.” Needless to say, I failed at recognizing the importance of the latter.

Don’t get me wrong: I’m not a gossip. As much as I enjoy a good tea-spill, I don’t enjoy talking shit. But unfortunately, sometimes I say things I should really keep to myself.

Here’s the thing: words get twisted all the time. Even if you think something you’re saying is innocent and not prone to start drama, it’s possible that it sounds worse than it is. If you’re not sure, just think of how you’d feel if you heard someone say the same thing about you.

In the vast majority of cases, an issue you’re having with a friend should be brought to them directly (or let go of, if it’s something minuscule). If you just need to rant, a trusted family member is the perfect person to go to; that way, you can release your frustrations and move on, instead of causing drama and talking shit.

5. Recognize and mentally take note of ALL the red flags you see.

I’ll be honest; I tend to ignore red flags and make excuses for my friends because I just don’t want to assume the worst. I’m not great at spotting indicators of questionable behaviour, and it’s hard for me to look at my friends’ actions from a distance without giving biased justifications.

This particular friendship fallout was definitely warranted. There were several instances in which their views contradicted mine in harmful ways, their loyalty seemed shaky, and their words hurt me. But I swept these instances under the rug, because I thought the good outweighed the bad.

Remember that noting the red flags does not equal pessimism. You can still have a happy, problem-free friendship — you just shouldn’t ignore the warning signs. Try to be as objective as possible when evaluating a situation, and think about what each red flag means for your friendship. Is it not a big enough deal to change anything about the friendship? Does it mean that you should keep them at an arm’s distance? Or perhaps you should refrain from sharing an aspect of your life with them from now on?

6. Acknowledge when the friendship is beyond repair.

Unfortunately, some friendships just don’t work out. Sometimes, the impact of a friend on your life becomes more negative than positive, and the friendship grows to be unhealthy and detrimental. So, once you’ve reached the last straw, it’s time to acknowledge it. Continuing to work at something that is beyond repair is exhausting and devastating; that’s another thing I learned the hard way.

Whenever I think I’m at my limit, I ask myself one question: “Is this the hill worth dying on?” In other words, is this a make-or-break issue? Is this worth ending our friendship? In some cases, the answer may be “yes” — and you’ve got to admit that to yourself before attempting to return to the way things were before. Instead, you can try to stop thinking and talking about the fallout — both with them and with other friends. Keep them at a distance, and be civil while focusing on the people that make you feel happy and loved.

If someone hurts you deeply, it may not be worth keeping them in your life. Know that it’s definitely sad to lose a friend, but it’s likely that you’ll be happier without them. Going through a friendship fallout taught me so much about myself, the people around me, and friendships in general; as much as I’d never like to go through it again, I’m glad I was able to learn so much. And at the end of the day, that’s what life is all about — learning from your mistakes and growing for the future.